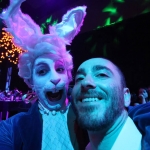 Frequently, a Venue and Company, such as Crown Melbourne, needs to treat it VIP clients and remind them why Crown is the primary destination for high end events in Melbourne.

Frequently, a Venue and Company, such as Crown Melbourne, needs to treat it VIP clients and remind them why Crown is the primary destination for high end events in Melbourne.

In conjunction with the In house AV Team, Instinct was was entrusted with creating an occasion to be forever remembered and not to be missed. The entertainment and events coalition all contributed to ensure that all the moving parts came together which resulted in an exception event enjoyed by not only the guest, but staff alike.

Alice in Wonderland Theme – Get in Character

To aid in the theme of the event, The Crown events and hospitality staff, which were involved in the event, each spent time with Instincts professional make up artists. The make artists were specifically chosen to ensure that they had ample previous experience creating the various Alice characters. These artists had the event and hospitality staff emerged in “Wonderland” in no time at all! The physical theming of the staff was to have a huge impression on the VIP guests.

An Alice in Wonderland themed event would not be complete without the famous characters which are a integral part to the story. For a VIP event such as this, a little more than simple costuming was required…..

Instinct’s make up artists, created a high end White Rabbit character, to compliment the event. This was achieved though a combination of high end costuming, makeup and facial prosthetic’s. This physical character make over can take up to four hours to successfully complete. Throughout this process, The rabbit was heard constantly muttering “Oh dear! Oh dear! I shall be too late”. Luckily enough, Instinct’s talented make up artists worked their magic and had the character ready for the arrival of the VIP Guests. The rabbits primary role was that of a character host. Working alongside the additional characters, incorporating role playing, roving, meet and greet, and offering photos were some of the small roles in which the rabbit was tasked with achieving. overall the rabbit character was a hit with all the guests. Instinct incorporated not one, but two, Alice in Wonderland characters in the event. The first, was a blonde Alice character who joined the Rabbit acting as a event host. This character was costumed and makeup accordingly to match that of the rabbit and the Mad Hatter. This Alice character also ate at the table with a number of guests and recited enchanted stories of adventure. The guests were impressed with her ability to stay in character! After the meals and formalities had taken place, It was the time to enjoy the afterparty! Instinct had our very own DJ Clare (Brunette) also dressed as Alice. Along with Alice and the White Rabbit, the trio was made complete with the addition of the iconic Mad Hatter! The Mad Hatter combined roving, meet and greet, playing as a character host along with offering some up close magic, and some very orange eyebrows to compliment the night! Along with the trio of character hosts, Instinct arranged for some curious procession performers to offer ambient roving acts though the night. These wonderful and weird characters accomplished their silent entertainment performances through incorporating mime and synchronised movement. These performers were an ideal addition for the meet and greet areas.

Whilst the roving performers greatly aided in delivering the theme, Instinct also had a custom suitable dance and song number created to further highlight the event. Along with his team, the front man of Forever 80s and Oz Boys, Richard Swanston was chosen to choreograph a “wonderland” style performance. The performance was offered as a post meal treat highlight! The in house AV team worked to the highest standards to transform the Studio 3 room at crown into a themed Alice in Wonderland escape. The studio three room had never before been worked over to such a extent. Crowns kitchen was then responsible for offering for and drink hospitality which would take the event to the next level! Instinct’s in- house videography team attended the event and was given the task of capturing the event **see the post event video attached on this page** Instinct offers all event clients high end, professional videography packages which clues multi camera shoots and superb post production editing.